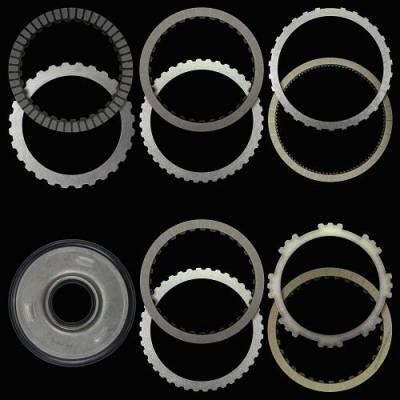 From failure to success, a friction story.

SunCoast not only has improved the friction material in this clutch but dressed some common downfalls within this unit. By addressing these we have increased clutch capacity in some very specify areas.

The intermediate power pack is upgraded with 15% improvement in friction surface area. The factory set-up uses 6 clutches and 6

steels. We have upgraded this clutch pack to 7 high performance G3 clutches and 7 steels.

The direct clutch power pack is addressed next. We have increased this power packs friction surface are by 20%. This new high performance power pack increases clutch count to 6 G3 friction and and 6 custom cut machined steels. This added clutch capacity along with the improvement in friction material dramatically improve the longevity of this clutch pack.

The overdrive clutch pack is addressed as well. This particular power pack is usually the first to go. It is the smallest clutch within the transmission while having least amount of torque multiplication assistance. The factory utilizes 7 frictions and 7 steels in this clutch pack. We have increased this to 9 clutches and 9 steels boasting an additional 24% friction surface area. The overdrive piston has also been replaced with a newly machined one.

This new clutch kit is ideal for individuals that are looking for increased durability over the factory clutches. Whether towing heavy loads or playing at the dragstrip on the weekends this clutch kit can suite your needs.

The new 6R140 from from Ford is definitely one of the most exciting drivetrains on the market today. The new 6R140 was released to replaced the previous Torqshift unit, which was the 5R110. The 5R110 was previously used in both the 6.0 and 6.4 Ford diesel engines. When Ford released the 6.7 L Powerstroke powerplant it also released the new much stronger 6R140 Torqshift transmission.