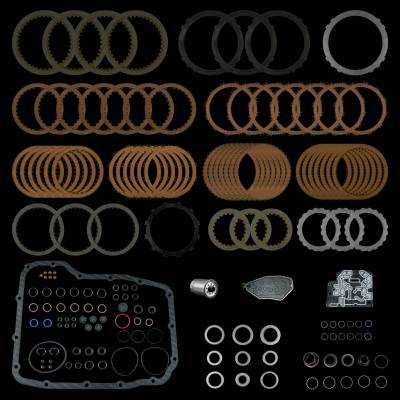 The 68RFE
The 68RFE transmission is the big brother to the 45/545RFE transmission. The RFE platform was originally designed by Chrysler and was introduced in 1999 with the debut of the new Jeep Grand Cherokee.

The "RFE" stands forRear-wheel drive Fully Electronic control. The RFE design was mostly noted in the new design to have 3 planetary sets for a 4-speed transmission in the 45RFE.

In 2007, Chrysler debuted the new 6.7 Powerplant in the all new Dodge Ram, and Dodge wanted a transmission that was specifically designed for function. The previous platform utilized the Torqueflite 48RE platform and had been around since the late 50's when they released the first 727 in 1956 after purchasing the license from Simpson on the gearset in 1955.

The 46/47/48 Chrysler platforms were 3 and 4-speed units that were mechanically and hydraulically controlled, with the most notable control system being governor pressure.

The first improvement Chrysler wanted to make over the Torqueflite platform was, obviously, the amount of forward gear. For the 68RFE transmission, Chrysler opted to change to a six-speed unit. The additional gears allowed Chrysler to add higher 1st-gear ratios and tighter shift recovery from one gear to the next. The tighter shift recovery essentially keeps the vehicle in higher averaged horsepower and torque numbers, while also adding torque multiplication.

These kits offer you the same recipes that are used in our facility. We aim to offer you the most complete series of 68RFE rebuild kits available on the market today.

Dodge trucks pulling heavy loads or boosted to 400-600HP are at high risk for overdrive burn-up due to the stock transmission's insufficient clutch capacity and fragile OE clutches. Even small amounts of heat and extra torque will push the thin (.034"), single-sided clutches over the edge, distorting the clutch pack. The fact is, any distortion of the clutch pack takes the clearance out of spec and makes overdrive clutch burn-up inevitable.